The Silver Link Mine may have been located in one of the steepest and most inaccessible locations in all of the San Juans, as it was situated up on the high cliffs at the very beginning of the Ouray side of Engineer Pass(also known as Hemorrhoid Hill).  I used to be able to look up on the side of the cliff and see what appeared to be a building with a door that I assumed was the Silver Link, but even that has long since disappeared.  This Link to Google maps  is all I could find that appears to be the old Silver Link Mine, but I am just not sure.  I have always wondered how they even accessed this mine and after searching around on Google Maps I still see no sign of a road or trail or tram-way, so I have not a clue.

The Silver Link Mine

In this photo, three of its miners can be seen.  Only the mine track ran out to the man on the right, and then it just dropped off into space.  Snow covered the backside of the building and the smoke stack on the left was raised an extra ten feet or so to keep it from being totally buried during heavy snows, no idea how they got fire wood there.  The mine’s only outside structure was built under a steep cliff in hope that an avalanche would pass over the top of it.  The Silver Link Mine was located at 10,500 feet and followed a huge vein that was sometimes as much as twenty-feet wide.  The Silver Link Mine doesn’t look like much of a mine in this photo, mainly because there wasn’t any more room for anything to be built on the outside, but it had over 2,200 feet of drifts(tunnels).  Hand-picked ore from the mine contained up to 300 ounces of silver per ton and assayed at 30 percent copper.  The mine was extensively developed in the 1880s and operated well into the twentieth century.   Which once again brings up the question, how the heck did the get here and get ore down??  Sounds like an exploratory trip needs planned! 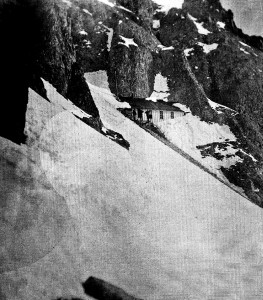 The extreme location of the Silver Link Mine!