It appears that a history of 4x4ing, or off-roading the San Juan Mountains would not be complete without a discussion of the Father of the sport,(or as some of us could say ‘career’) William E. “Buddy” Davis.  He was born in Story City, Iowa, about as flat as you could imagine, on Dec 23, 1906.  The mountains called him away in 1919 when his family moved to Delta, CO, firmly located on the western slope.  In the trip from Iowa to Western Colorado Buddy and his father drove two of the first hard-tire trucks over the almost impassable continental divide.  I am sure there were some good stories created by that journey!  Buddy, being only 13, was accredited at that time with being the youngest person to drive a motor vehicle over the Rockies.  This was the beginning of his driving career.

Buddy and his father pioneered the first truck-freighting business on the Western Slope.  Their first rigs consisted of two trucks-a Bernsrein and a Denby. Upon dissolving the freight line Buddy began driving a bus for the Rio Grande Trailways.  Buddy also wrangled the school bus from the Idarado Mine located near the top of Red Mountain Pass into Ouray and by June 4, 1954 had a three-year record of perfect attendance.  Just makes you wonder how many close calls with avalanches he could tell you about.

Enter the Jeep into his life.

In 1955-56 he became a representative of the Olathe Motor Company and was giving free demonstrations of Jeeps in both Olathe and Montrose.  As you can imagine demos led to sales, that soon led to guided trips, clubs, Cavalcades ( the original Jeep Jamborees) and Buddy starting the first Jeep Tour company around 1956 called Davis Jeep Tours.  I often hear the date of 1946 as the start date, but have found no validation as of yet!   The climax for Buddy was on August 19, 1959, when he piloted the first tour over the newly opened Black Bear Pass (we will cover this in full detail here) and his passengers, according to the Ouray County Herald, were very thrilled.  I would have to think so! 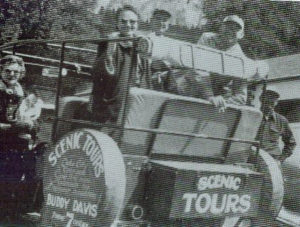 The Shock to Ouray.

You would have to admit that Buddy lived life to it fullest, as we all should, so let this be a lesson. On November 21 1959 a tragic hunting accident took the life of Buddy Davis at age 53.  He had left early Saturday morning with his hunting companion Ouray County Sheriff H. R. Scott and was hunting about 6 miles north and one mile east of Montrose. They had been hunting Pheasants and were about ready to return when a pheasant had been seen just off the side of the road.

Buddy stepped from the car and shot the rooster and then walked to the fence and crawled through leaving his shot gun on the outside of the fence.  He then reached back through the fence to pull it through.  The gun discharged, apperently the trigger catching on something and tripping.  The shot was fatal and Buddy died instantly.

Buddy was laid to rest in the Cedar Hill Cemetery with a unique head stone honoring his career as a Jeep Driver:  Today’s Jeepers and 4x4ers that love the thrill of taking on the Bear (Black Bear Pass) and dropping down the Z’s and W’s into Telluride should pause to give thanks to Buddy Davis who had a huge part in making it a reality.  Coming up the Jeep Cavalcades and More about Black Bear! 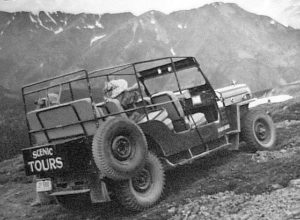 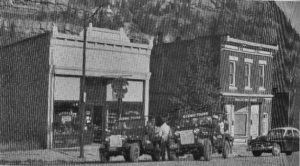