The Founding of Imogene Pass.

Through all the history of mining in the area, there had never developed enough of a need to have any more then a half-assed mule trail (pun intended) connecting Savage and Imogene Basins.  The same trail described by Harriet Backus in her Famous ( locally anyway) book “Tomboy Bride”  (affiliate link) when her and George took a day trip over to check out the Camp Bird Mine in the early 1900’s.  From her description of the trip it was even a bit of a challenge on a horse, defiantly not a wagon road.  There was stuff on top, such as Peabody’s Fort, a Power Line with maintenance shack and the Pump house at Ptarmigan Lake, so I imagine the trail up from Tomboy was fairly improved.  However the Imogene side had little activity it would appear, so was probably just a faint trail through the Talus and Tundra.

The 4-wheelers begin to organize.

In 1963 the Ouray Chamber of Commerce organized a Jeeping committee and Chamber President Frank Massard appointed Francis Johnston chairman of the Jeep Caravan Cavalcade Committee since these yearly get togethers had become an annual and significant event.  A 4-wheel Club was also formed with H.C. McNulty as president and along with its help from its sister organization formed in Telluride, plans were made to prepare the first official map of the San Juan Trails.  But in the dreams of all involved there seemed to be one huge missing link in the trail system, the obvious route over Red Ridge connecting the two towns together.

The Dream of an Imogene Pass 4×4 road comes true.

In 1966 a new Jeep trail, called Imogene Pass Trail, was to be built.  This would provide one of the most spectacular Jeep trips.  The Ouray trail would meet meet with the trail already already completed by San Miguel County from above Tomboy through upper Savage Basin to the top near the unique and historic Fort Peabody.  A significant wagon road was in existence from Telluride to the Tomboy Mine and there was a fairly well established trail to the top so the San Miguel’s guys finished their side with relative ease.  Ouray County had more of a challenge, as from the Camp Bird in Imogene Basin on up was basically all new road.  The county provided a caterpillar and an operator.  The the Ouray 4-Wheel club members volunteered many hours Nipping for the operator and planning out the route.   The route was designed for Jeep/4×4 travel only, let’s hope it stays that way!

A dedication was planned for August 28, 1966 by the Telluride and Ouray 4-Wheeler Clubs.  Dedication would take place at the historic Fort Peabody on top of the new, 13,114 ft Imogene Pass.  The Telluride side drops down Savage Basin till it reaches the Idarados Tomboy Mine then follows the existing shelf road through Royer Gulch ending up at the top of Oak street near downtown Telluride.

Leaving the top of the Pass and heading towards Ouray, the road followed an old pack trail into Imogene Basin where the Camp Bird Mine was discovered by Tom Walsh in the 1890’s.  The road skirts U.S. Mountain and went across what was known as the Log, road because there were many boggy spots that were made passable by logs having been laid in the path (often called a Corduroy Road).  This road would hook up with the existing road heading into Yankee Boy Basin near the Revenue Mine and the old Ghost Town of Sneffles.

Jeep Capitol of the World Proclaimed.

On August 28, the dedication of the new Imogene Pass Jeep Road took place.  Over 60 four-wheel drive Jeeps bounced, skidded and ground gears up the Ouray side of Imogene Pass that  Sunday morning.  On the bright sunny afternoon Jeepers from several states heard H.C. McNulty declare the Ouray-Imogene Pass-Telluride as the Jeep Capitol of the World as State Senator Wilson Rockwell cut the ribbon officially opening the new road.  A triumphant cheer went up from the crowd for the County Commissioners of Ouray and San Miguel Counties, all the local 4-wheeler clubs, and for the Idarado and Federal Resources officials who all had a hand in turning this dream into reality. 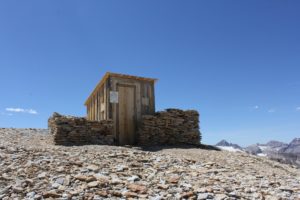 Next we learn of Francis Kuboske and the San Juan Scenic Jeep Tours!