In 1958 Francis Kuboske moved his wife, Mary, his daughter, Merry Lee, and son, Francis Bernard “Berney” to Ouray. On May 25, 1958, he purchased the building today known as Ouray Liqours from Mike Mingen.  The next year following the death of Buddy Davis, Francis purchased Davis Jeep Tours from Buddy’s wife, Maria, changed the name to San Juan Scenic Jeep Tours and set up shop in his new building with the three Jeeps that came from Buddy.

Three years later on November 1, 1962 Kuboske bought what is today known as the Meerdink Gallery on the west side of Main Street between 6th and 5th, and moved their office there.  They had arranged to store their Jeeps, which were now more numerous in the basement of the G.O.R. Garage in the southwest corner of 5th on Main Street. 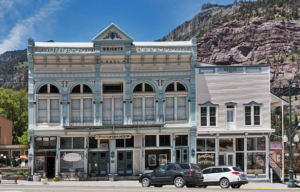 Three years later, on October 4, 1965, Francis and Mary Kuboske purchased the building housing the G.O.R. Garages and then two weeks later bought the attached Wright Opera Building.  In 1977 they moved the tour operation into the ground floor of the Opera House.  This is where they where located when I became involved with them in 1986.

The most fun you can have with your clothes on.

I only got to meet Francis myself on 2 occasions, The first time, I was working for a insulation contractor fresh out of a solar course and after Regan had eliminated all the Solar Tax Credits and all the solar businesses were folding, so here I was.  We where blowing the attic of the old house in an area know as Idawilde near Ouray.  Every now and then I would stick my head out of this attic to catch a little fresh air and I would notice a collection of 4×4 vehicles, many trucks but also this funky looking 4×4 Thunder Bird.  As we where wrapping up the job I got to talking to this old character and I asked him what the heck he did.  He told me about these 4×4/Jeep tours he took into the San Juan Mountains around Ouray and that they were always in need of drivers in the Summer.  That’s about all it took before I was sold!  Sounded like a lot better a job then breathing carcinogenic fibers for a living, so sign me up! 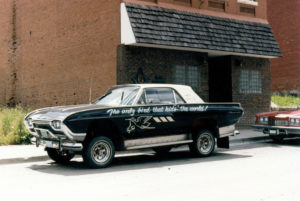 My next meeting was several months later, I think it was March, but in order to drive tours at that time I had to take a chauffeur’s driver test.  The driving part of this test had to be in a company owned vehicle, so I had set up an appointment to meet Francis and a company rig in Montrose to perform this driving test.  I woke up the morning of the appointed day to a heavy dump of snow and since, at that time, we had no phone, I just headed to the Courthouse.  Francis showed up with this 4×4 Van, and I used that rig to take this silly test which was exactly like a conventional driving test, but whatever.  After the test I sat with Francis in that Van all afternoon and got bombarded by the master story teller, or B.Ser!  I learned more then I could remember, I learned that he was a master mechanic and had some special certification that included a special key to unlock the distributor of a Studebaker or such.  He told me about his boat racing career on Lake Tahoe or such, and on and on.  The only advice that really stuck with me was when he told me “Clay the secret to being a great tour driver is, never let the truth get in the way of a great story.” I assured him I would work on that and eventually we parted and he headed back to Ouray.

It was well into June before I actually got started in my new Jeep Tour career, and had been working several days when I asked Bernie Kuboske, Francis’s son, when his father was going to come in as I really had enjoyed talking with him.  Bernie asked, ‘hadn’t I heard?’  Apparently after he had left our B.S session, driving home in all the snow he spun the Van off the road, which put him in the hospital.  I didn’t know this ether, but he had been fighting cancer, and this jolt appeared to had taken him out of the remission he had been experiencing, and the cancer soon overcame him, and he had passed away about a month before.  I was in a bit of shock, and I apologized to Bernie for his dad having to meet me for this silly test during a blizzard, but Bernie assured me that was his nature and there would have been no stopping him even if we had tried.  Later that Summer his ashes where taken and spread over his favorite trip, Black Bear Pass, and according to Merry Lee, his daughter, an Eagle flew over the procession.

The Legacy of Mary E.

I could go on and on about different vehicles he had modified over the years, as you saw the T-Bird and the variety

of vehicles he turned into cool tour rigs, but one special rig he had modified was in honor of his wife who had passed I think in the late 70’s.  Apparently when the Ouray Ambulance service ordered their 1970 Ambulance built using a Chevy Suburban, 4×4 wasn’t an option.  If I remember the story correct, but don’t quote me, the ambulance couldn’t make it to the Kuboske’s house during a Blizzard while Mary was having a heart attack or such.  So to honor his wife Frances upgraded that ambulance to a 4×4 rig and had it named after his wife, labeling it Mary E.  That rig really made the rounds around here because I had run into it many a time, even to the point that my good buddy Seth bought it and I had actually gone wheeling with it once.  I just always thought it was a cool rig! 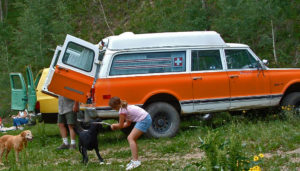 There must have been a special relationship between Frances Kuboske and trucker icon C.W. McCall, or Bill Fries as he was known by his friends and as the long term Mayor of Ouray.  Maybe because McCall rented the Wrights Opera Hall from Francis starting in 1977 till Bill retired in the 90’s, where nightly all Summer it featured his San Juan Odyssey.  It was described as a breathtaking panorama of the San Juans high country.  It is portrayed in color on five giant screens by fifteen projectors and accompanied by the London Symphony Orchestra on a state of the art sound system.

But I often wonder what the root of the story is that led C.W. McCall to twice mention Francis in his hit song, and kind of a anthem for Jeeping in the San Juans, “Black Bear Road”.

1- We had us one’a them you-Drive-‘Em Army Jeep cars which we rented from a fella by the name of Kubozke for thirty bucks a day, buy your gas along the way, take a rabbit’s foot and leave a pint of blood for a dee-posit.

2-We come upon a sign says “Black Bear Road. You don’t have to be crazy to drive this road, but it helps.” I says, “RJ, this must the shortcut road Kubozke was talkin’ about.”

With the details C.W. delves into with this song, you just have to imagine he actually experienced such an event as he portrays in this song, heck his wife really is Roy Jeane.  I had opportunity to speak to Bill back in the day, but for some reason I never took advantage of it.  But in this point in my life I would just love the opportunity to sit down and have a chat with him, as he truly loved the San Juans and Jeeping around in them, and I think he is still kicking and living in Durango.   Hmmm, I will need to pursue that idea!

My Dedication in my Black Bear Guide Book!

Like I say, I could go on and on about Frances Kuboske and San Juan Scenic Jeep tours and the adventures he had in the San Juan Mountains, which would make a fun book, but I do need to wrap this post up.  Francis, with only having met him twice, really changed the direction of my life and passions, to the point that I actually dedicated my Tour Guides, Guide to Black Bear Pass to him, and, as with him, I would also like my ashes scattered across the stair steps and switch backs of “The Bear” when I meet my end, and I can only hope I leave behind even half the legacy.