Knipping for the Snow Plowers in the San Juans!

Ever had to Knip for the county road crew in the San Juan Mountains?  I am not even sure I am spelling this right, but 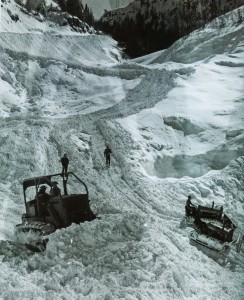 in my early years as a 4×4 tour guide in Ouray, in the early spring we had to take turns knipping.  What the heck is that you may ask?    quite simple we road up with the operator that was plowing the snow off of the local 4×4 roads, then stick with him and at the end of the day ride back down with him.  I think our duty was to-fold, one was to keep his rig close to him as he worked and the other was just in case he needed some help.  Though it didn’t pay a dime, it was easy and relatively fun way to spend a day. 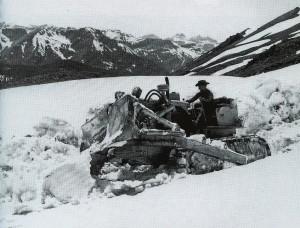 I think this operator is nearing the top of Engineer Pass during the 60’s.

That is a question I asked the operators many a time.  The general consensus was, they didn’t 😉  Many of these guys had been doing this job for a zillion years and did, more or less, know where the road was, but they did have some exciting stories.  It is harder to push the snow up then down and once
when I was knipping on Engineer Pass I watched the operator punch straight up the side with the
Caterpillar, then, over the period of the day plow his way back down to where I was waiting. That was
pretty impressive.  But as I said, some of their story’s where even better!

A whoops in Imogene Basin!

The old Ouray County operator shared this story with me during lunch.  Happened just about the same place as the Caterpillar is located in the top photo, cutting through the often 80 ft deep drift coming out of Imogene Basin.  The story he shared was that at one point cutting up through this huge drift, the slab just slipped about 10 ft to the down hill side.  He told me he grabbed the brakes and just prayed till it all stopped moving.  He then killed the engine, carefully walked off of that drift, cleaned his pants then road back to town to have a bunch of shots of Whiskey.  Next morning he was back up there finishing the plowing!

A whoops at the top of California Pass!

This story was shared to me by a San Juan County (as in Silverton) road department guy.  He was telling me he was working on the Friday before  the memorial day weekend and was pushing on to the top of California Pass, thought the top would be a good spot to stop for the long weekend.  The plowing was going pretty good he thought as he carved a route out good enough that his Knipper was able to follow him to the top.  They parked the Caterpillar, climbed in the truck and headed off to enjoy a well evened 3 day holiday.  Come Tuesday they are heading back to work and as they get close to the Cat, they see that what they thought was the road had actually slid off the side of the mountain, they had not only driven the Cat over nothing but packed snow with a 90 degree, or so, slope under it, but had also driven a pick-up truck both up and back down.  They told me as they thought this through they began to have a post event panic attack, or whatever you would call that 😉  The operator trudged his way through the deep snow to get to the machine, then tried once again, this time cutting open the actual road.

Heavy equipment in the air over the San Juan Mountains!

I did want to share these couple shots of this awesome Helicopter that was hauling Timbers to the Lewis Mill as part of the stabilization they where doing to it.  This was one awesome piece of heavy equipment if you ask me, just saying! 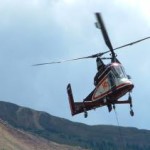 Copter over the San Juans 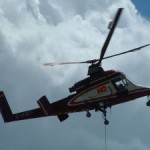 Carrying Timbers to the Lewis Mill!