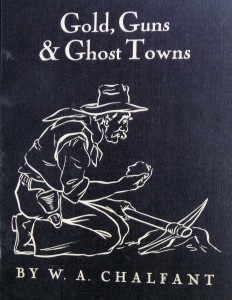 I would like to thank my daughter for picking me up this book at the Library Sale and I would like to thank the author W.A. Chalfant, publisher of the Inya Register of Bishop California.  Most of the tales in this book were featured stories in his paper from the early teens and twenties.  Will was a born historian with the instincts of a careful research technician and a gift of weaving the tapestry of early Western history with words.  After his death some of his best work was gathered together  by Horace Albright in 1947 to create a volume known as “Gold, Guns & Ghost Towns”.

Law and Order during Anarchy

My favorite chapter turns out to be #11 titled Crime & Punishment about how justice was dealt during a time of what would be considered anarchy by most definitions.  This chapter captured my imagination and what I am presenting is a collection of quotes from this chapter- I hope you will enjoy and be enlightened as to how humans govern themselves under the rawest of circumstances.

Crime & Punishment in the “Wild West”

“The real builders of the West were no weaklings.  Men of initiative and enterprise ventured, else no venturing would have been done.  These were the salt of the earth, high in every item of character.”  “As in a furnace, the fires of severe and unique tests separate the pure gold from the dross.”

“When the isolated camp devised its own effort at protective rules, the resulting code was terse and direct.  Fine-spun legal points had no place in popular legislation, as for example in the following “Rules and Regulations” adopted by the miners of Gold Hill, Nevada:

Section 1- Any person who shall willfully and with malice aforethought take the life of any person shall upon being duly convicted thereof suffer the penalty of death by hanging.

Section 2- Any person who shall willfully wound another shall, upon conviction thereof, suffer such penalty as the jury may designate.

Section 3- Any person found guilty of robbery or theft shall, upon conviction thereof, be punished with stripes or banishment as the jury may determine.

Section 4-  Any person found guilty of assault and battery, or exhibiting deadly weapons, shall upon conviction, be fined or banished as the jury may determine.

Section 5- No banking game under any consideration shall be allowed in this district, under the penalty of final banishment from the district.

Herein are no definitions of degree of crime, no involved explanations or details of how or when or by whom the sentences of convicted culprits should be put into effect.  Every man in the district knew that the promised “stripes” would not be carefully drawn with a paint brush.  Every one knew what a “banking game” was- even if in these tamer days the reader does not- so why burden the laboriously written pages with a mass of descriptive language?”  Note- What the heck are they talking about with “banking game”?  Never spoken of again nor defined, could they be referring to gambling or actual banks???  I have also noticed through this whole book woman are rarely mentioned and prostitution was never brought up, hmm!

“Theft was more likely to bring punishment than murder, on the theory that human beings could protect themselves, while property was helpless.”

“It would seem that the coming of courts increased rather then decreased crime.  Offenders were freed from the dangers of “popular tribunals,” while the feeble courts and legal processes failed in their duty.  Officers were not infrequently named by factions for purposes of their own.”  Note- Same as it ever was.

“With some exceptions, the vigilance committees were necessities, nothing less.  They are not to be judged with the mobs that sometimes stain today’s records. (Note- this was written in the teens/20’s, interesting)  When they struck, it was because there was no other recourse for the safety of life and property.  Their leaders were generally the best citizens of the community-men who had seen justice flouted to unbearable degrees, men who had patiently seen the vicious go to the uttermost limits encouraged by the lack of womanly (not talking about prostitutes I wouldn’t think) and home influence, and the absence of a right public opinion, the absence of legal control, and by almost universal indulgence in liquor that brought the worst in every potential criminal (and wife beater) to the surface.  Every vigilance committee was built on a substantial foundation of essential morality among the better classes, and on a sense of justice which remained dormant until some emergency, or persistence of conditions beyond the bearable limit, brought out a power until then submissive.”  “The people become sheriff, jury, judge and executioner.  Lynching became common, and was often justifiable, for what was to be done with a red-handed murderer or a highwayman by a community which had no prison, and whose sheriff, for all they knew to the contrary, might be in collusion with the criminal.”

“Leave us the power of the people as a last resort, and where governments break down the citizens will save the state.”    Note-Wow that is some great stuff!! 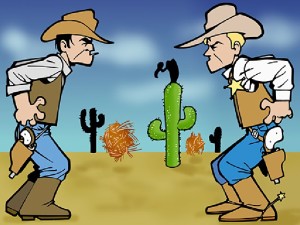 “But the vigilantes played a very small part indeed.  Crime for the most part ran on in many communities almost unchecked.  There was too much justification for the belief that men were their own law in a period of quick triggers, general carrying of weapons, and unbridled passions.”  Note- Be not afraid of any man who walks beneath the sky’s, when danger threatens call on me and I will equalize! -Colt Revolvers!!

Would love to hear you opinion on our Face Book Page!