Legend of the Grand Mesa Thunderbird’s

I love Grand Junction and the western half of Colorado. I grew up here

and my appreciation grows daily. Its “regular & realness” of

and inspire me daily. As we grow in population, I hope the Grand

landscape and the outdoor joy in our midst.

The Thunderbird Hieroglyph on the Grand Mesa

Elementary School where Thunderbird’s were our mascot, I saw the bird

like feature but no one else noticed it or knew what it was. The

Patterson Road traveling east toward Grand Mesa in Grand Junction. Have a look if you

can before reading this tale…

The T-Bird on the Grand Mesa Taken by Seth with his cell phone from a plane!

Valley. This story relates to a feature on the Grand Mesa that looks

over the Grand Valley everyday. After reading this, I hope more of us will look back

Ute natives looked at their world.

Starts with a fishing trip to the Grand Mesa.

of my closest friends. We watched huge cutthroat trout cruise the

shore and ignore our dangling lures… I grew bored. I scrambled

straight above the lake unwittingly discovering my favorite hiking

trail in Mesa County, the narrow ridge of Crag Crest. As I returned to 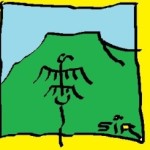 The Legend of the Grand Mesa T-Bird

my friends on the rocky lake shore, we heard an eerie sound for

several minutes. The air seemed to vibrate like a whale song blown

through a continuously curving vacuum hose.

vibrated. All was perfectly calm around us. We were unnerved. We

packed up our empty tackle and hurried down the trail for the car. On

answers. We asked a gray haired man at the counter if he heard any

strange sounds or winds that day. He said nothing and handed over a

sheet of paper that told this story;

The Gran Mesa legend from the Ute Indians

giant eagles) ruled the skies and lived atop the Grand Mesa. One day

nest on the Mesa’s edge. The fiercest warrior disguised himself as a

tree and climbed the Mesa to their nest. He discovered that the

children had been eaten. In vengeance the warrior threw the

Thunderbird eggs over the Mesa’s edge to the valley below.

The Thunderbird’s returned to find an empty nest. They looked down to

find that their offspring had been swallowed by a giant serpent –

perhaps the serpent represents the Colorado River- in the valley. The

great birds screeched down lifted the great serpent high over the

Grand Mesa. In a raging storm the bird hurled electrified pieces to

the forest below, creating huge scars on the Mesa’s previously flat

top. The storm raged and the gouges were filled with sorrowful tears

from loss of their offspring, thus forming the many lakes of the Grand

of the departed spirits.” The Ute’s ritually suspended their dead

spirit world on the Mesa.

It is said that there are two strange winds that blow across the Mesa’s crest: One is the Thunderbirds screeching for their lost young,

and the other is from the Ute warrior calling for the tribes lost children. I’m not sure which one Chris, Ed and I heard, but my guess is the wail of the Thunderbirds.

A Legend for All to See 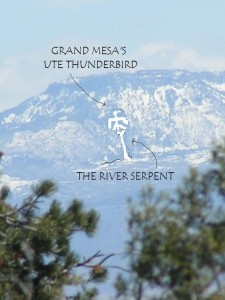 All can see if they know where to look!

We can lay eyes on the legend everyday from the Grand Valley. Just

colored hieroglyph in the pines forming the shape of the great

Thunderbird. Below the feature is a slender chute through the trees

toward the feature. The Ute legend says the Serpent Chute is the

height of ten lodge-pole pines. The legend tells that when the

Thunderbird grabs the serpent, it rains in the valley. I don’t

suggest that I believe this or any other myths. However I have seen

this very event occur. As my family returned from a long trip out

west, I saw the setting sun strike the Thunderbird and then light up

the snake on the west face of the Mesa. Just then it began to rain and

foretelling light show- on the Grand Mesa above Grand Junction. Listen for the

when rambling among the lakes, forests and ridges on top of Grand Mesa.

Grand Mesa and the Grand Valley

I long for a more complete grasp of the Grand Valley’s history, but I

our collective story in Grand Junction. I think we should all remember

the past and consider it’s importance; history’s lessons can yield a

brighter future for us all.  Seth Anderson 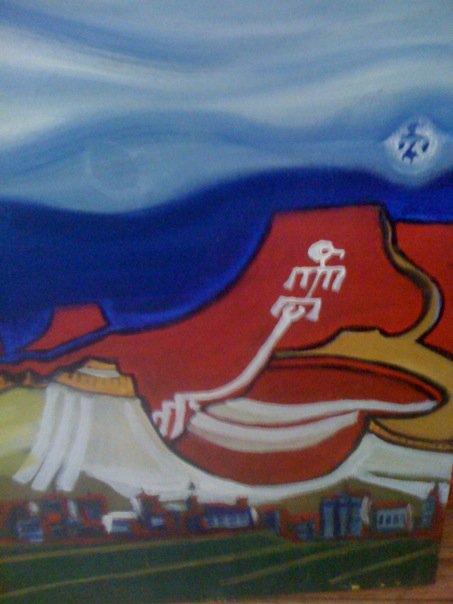 The serpent grabs for the Thunder Birds tail on the Grand Mesa.