So lets review what we know about Snowsnakes-

From what I have learned from the Urban Dictionary  Snowsnakes are 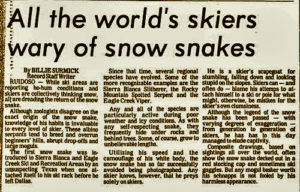 the nemesis of skiers and boarders the world over. Snowsnakes tend to like to warm them shelves on steep snow-covered slopes. Their white color makes them impossible to see while skiing or boarding. Often the cause for unexplained wipe outs.
example- Dude1: Man, that was a killer wipe out!-Dude2: Yeah, must have hit a stinking snow snake!
From talking with Peter Roma, head of the Snowsnake preservation institute, I have learned that  The Miners claimed the snakes where attracted to the leather bindings of their 11 foot skis they oddly called “Snow Shoes” and that collisions with the snakes cause wipe-outs leading to Yard Sales and if enough get involved a Swap-Meet on the side of a mountains.

At hunting camp, there was usually snow on the ground, and you always saw the snow snake tunnels near camp in the mornings.  Were they searching for food scraps, or perhaps lurking to accost the unwary hunter who stepped outside in his longjohns to look at the stars?  For those who have never encountered the snowsnake, let me tell you that you are very unlikely to see one, but you may see evidence of his passage.  Look near the trails for a round or near-round hole in the deep snow, surrounded by a yellowish border.  If it is very fresh, you may detect a faint sulpher odor.  The elusive snow snake has been and gone.  This tunnel may be his trail thru the snow as he hunts for food, or the entrance to his undersnow lair: I have never stuck a hand in to explore it.

Word from Nature North we learn-

Early explorers to Manitoba left some anecdotal evidence in the form of crude drawings on birch bark suggesting the existence of the great white snakes. But debate over the existence of these creatures may now be put to rest with the first authentic pictures of snow snakes! Though they seemed to be slithering around the branches quite rapidly at times, he was apparently  able to get these shots using a telephoto lens through the back window of the beverage room at the West Hawk Tavern.

Paul Bunyan had a run in with a few!

One of the greatest dangers faced by Paul’s lumberjacks was the many wild, but happily now extinct, animals that haunted the woods in the vicinity of Paul’s camps. Take first the snow snake. It came across from China the year of the two winters when the Bering Strait was frozen over. They were pure white with pink eyes, and many were the young lumberjacks that were “froze still” of fright just thinking about them.
From Marjorie Edgar’s “Imaginary Animals of Northern Minnesota,” published in 1940 we learn-
“My first experience with the snow snake was at Beaver Bay, in the very snowy December of 1927. A snow snake, I was told, is not large, but is active and dangerous, dashing around over the snow and biting into the hunter’s boots.” According to a trapper’s wife she met, a snow snake was “certain death to meet.” Edgar heard from some road workers that the snow snake “takes in snow though its mouth and blows it out again through a hole in its head.”

“comes out in the cold weather” and bites victims, causing their “blood to freeze.” Snakes, like other reptiles, are cold-blooded creatures that depend upon external warming to regulate their body temperatures and cannot survive outdoors in snowy climes — species of snakes that inhabit areas with colder climates generally go into a hibernation-like state known as brumation during the winter months, burrowing or seeking other forms of shelter where they can remain warm and dormant until the season passes.

Wikipedia claims it is a game.

Snow snake is a Native American winter sport traditionally played by many tribes in the northern Midwest, including the Ojibwe, Sioux, Wyandotte, Oneida and other Iroquois people.   A game of snow snake is played by four teams, called “corners”, who compete in trying to throw their wooden “snow snakes” the farthest along a long trough, or track, of snow. The game is divided into rounds, and in a round each team gets four throws. At the end of each round, two points are awarded to the team of the person who made the farthest throw in the round, and one point is awarded for the second farthest throw.
So that’s what we know so far!  Do you have a storie you would like to share about your experience with the Legendary Snow-Snakes.  Please share them on our Facebook Page! 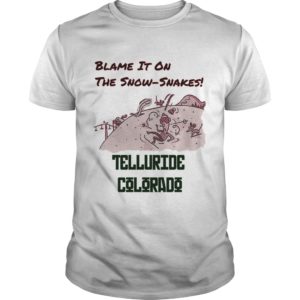 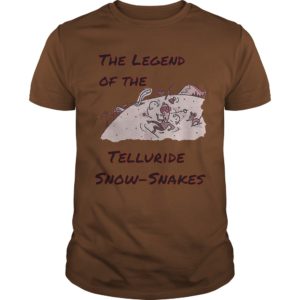