So you survived the Wall I see.

You will find some more twist and turns and drops ahead, it is just kind of a fun area and a place to unwind a bit after the wall. As you roll around a boulder things open up a bit and you should soon find the other end of the new bypass.

The Bypass, Gentrification of Poughkeepsie Gulch!

Honestly it has been a couple years since I have done a trip through Poughkeepsie Gulch so I haven’t seen how it turned out, but I had walked and helped lay out the trail which was the old wagon road, but I wouldn’t had wanted to drive it the way it was with a lot of off camber stuff.  But sounds like quite an endeavor, with heavy equipment and lots of blasting and a estimated price tag of $67,450.00.

But whats my beef with it?  I think OCR14a on the FJ Cruiser Forum makes a great case for my beef also.  It’s like what the heck, this road is Legend and not for the faint of heart and if you can’t pull it off you need to just lick your wounds and try again some other day.  If you can pull it off, you have really done something to be proud of, something you can brag about at the water cooler when you are back in your cubical. But in this PC world, we don’t want the sissy drivers in there city slicker rides to feel left out and get all teary eyed, wahhh!

Reminds me of one time when I was coming down the Gulch, but I was on top of the Rock, and I met this brand new Jeep Grand Cherokee LT leather seated foo-foo rig coming at me.  We stopped and there was this nice looking retired age couple driving it.  I asked them, did you just bring that rig up “THE WALL”? They are like,”sure, what we bought this thing for”.  I was impressed and good for them, they where now part of the ones who had conquered the Legendary Poughkeepsie Gulch!

But anyhow we should all be safer now.  Won’t be long when we will all have to live in a padded cell for our own good!

For the next good long stretch of the trail you will find it is a bit rocky.  My first trip I had ever taken up this Gulch was with my brother in-law and his old Ford F-150 and I was in my ’79 Blazer and when we got to this section, we where just churning our way up this, kind of like driving on large Ball Bearings.  But I remember we where being followed by to Suzuki Samurai’s and these rocks just ate them alive and they eventually had to tun back.  You will see a cabin, something fairly modern, that must have been a mining claim someone picked up, probably for back taxes.  Could have been part of the Old Lout Mine!

The Old Lout Mine. 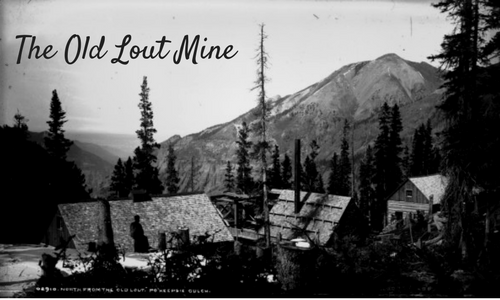 The Poughkeepsie Gulch Tunnel into the Old Lout.

The Old Lout started in a stupid, awkward way as befitted its name at 11,557 ft not far from the the old town on Mineral Point.  A shaft was dug down 300 ft with no mineral of importance being found. The crew was ordered to quit but one miner still having a charge of dynamite set it off as he left.  The blast uncovered a body of high grade. The first carload was reported to have netted $8000, and within a month $86,000 realized.  It was an inclined shaft that ended up getting about 500 ft deep and is reported to have six levels of workings.  It was a fabulous source of high grade ore. $245,707.31 is reported as having been netted between 1884 and 1887.  That sum is equivalent of multi-millions of dollars today.  Water problems led to the determination to tap the vein at a lower altitude. 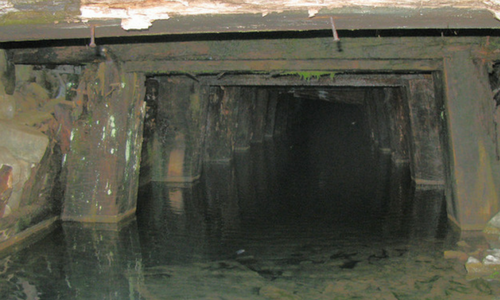 That is a bit of water.

What we are looking at is the Poughkeepsie Gulch Tunnel , driven at a later date, 900 ft below the collar of the shaft, at an incline to create drainage for what turned out to be an exceptionally wet mine working and also providing cheaper transportation.  The extensive dump located here indicates a successful and major operation.  Reports showed the tunnel length at 1,865ft with 1,700 more feet drifts, cross cuts and raises.  According to the government report the operation was abandoned in the 1890’s because of a disastrous snowslide and fire coupled with the silver crash of 1893.  But apparently it had been extensive worked in later years which led to the old ghost community of Poughkeepsie, near the intersection with Engineer Pass Road, which existed in the early years of the twentieth century.  More recent investigations indicate the true Old Lout vein had never been tapped, but the miners had drifted off on yet another valuable vein.  Its been determined this tunnel is about 500 ft south of the shaft, and possible had drifted off on the Forest Mine vein.   So the rest of the un-tapped wealth of the Old Lout has yet to be profited on.  I wonder if the guys at Gold Rush Expeditions know about this?

Let’s finish out this Adventure. 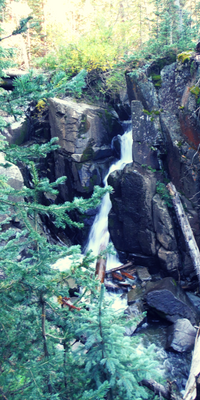 As you journey down from the Old Loud you will continue to experience some real cool sections of road till you get to the intersection with Engineer Pass Road.  This open sort of open area was where the newest location of the town of Poughkeepsie, though there where two others located up this Gulch.  One was basically up at Lake Como and at one point claimed to be the highest post office in the country. This town was in support of the Old Lout mine and if you wonder around through the brush you will find a number of remnants of that old ghost town.

At the last water crossing, where there looks as if there had been a bridge at one point, head upstream just a bit to enjoy Miner Creek Falls.  So, according to the sign, the rest of the trip should be real easy as it is called Highway 550.  Pun intended!