Mt Sneffel is the iconic 14 thousand foot mountain rising up behind the Double RL Ranch near Ridgway, Colorado and a landmark from all over the High Country of the San Juans Mountains of Southwestern Colorado. 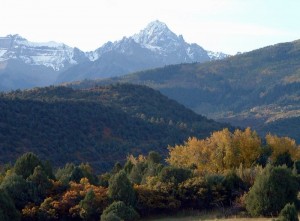 Mt Sneffels from near the entrance of the Double RL Ranch.

According to most accounts, it was during the mountain’s first recorded ascent–on September 10, 1874, by four members of the U.S. Government’s Hayden Survey (Franklin Rhoda, Allen D. Wilson, Frederick M. Endlich, and a packer named Ford)–-that Sneffels was christened with its present name. Standing in Blue Lakes Basin beneath the mountain, the climbers compared the dramatic abyss to the great hole in the earth through which Arne Saknussemm reached the center of the earth in Jules Verne’s 1864 novel, “Journey to the Centre of the Earth.” Endlich agreed with this analogy and, pointing to the great peak above the abyss, exclaimed, “There’s Snaefell!”, referring to the Icelandic mountain that rose above the hole in the earth in Verne’s novel. This original name was pronounced by the local residents as “Sneffels”–a misnomer that found its way onto later maps and survives today (Hart, 1977).

Not all authorities agree, however, with this account of the origin of Mt. Sneffels’ name. Some claim that the mountain was named for a Mr. Sneffels, said to be an unlisted member of the Hayden Survey. Others have argued that the word “Sneffels” is a distortion of the word “snowfields;” in fact, the word “snaefell” is actually Nordic for “snowfield” (Ormes, 1970, p. 215). It is also said that “early miners called the mountain ‘Mt. Sniffles’ for the colds they acquired in the mines” (Eberhardt & Schmuck, 1970, p. 121).

For awhile, the mountain was also called “Mount Blaine,” a name Lieutenant William Marshall’s division of the U.S. Government’s Wheeler Survey gave it shortly after the Hayden Survey’s ascent. “Blaine” refers to James G. Blaine (1830-1893), congressman from Maine, Speaker of the U.S. House of Representatives, Secretary of State in the cabinets of James A. Garfield, Chester A. Arthur, and Benjamin Harrison, and unsuccessful Presidential candidate. 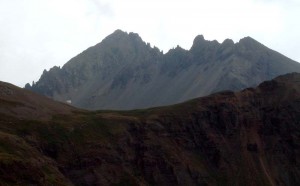 Mt Sneffels can be seen from many directions in the San Juans.  Even if you are all the way down near Grand Junction Colorado you can easily find South by looking for the mighty Mt Sneffels! 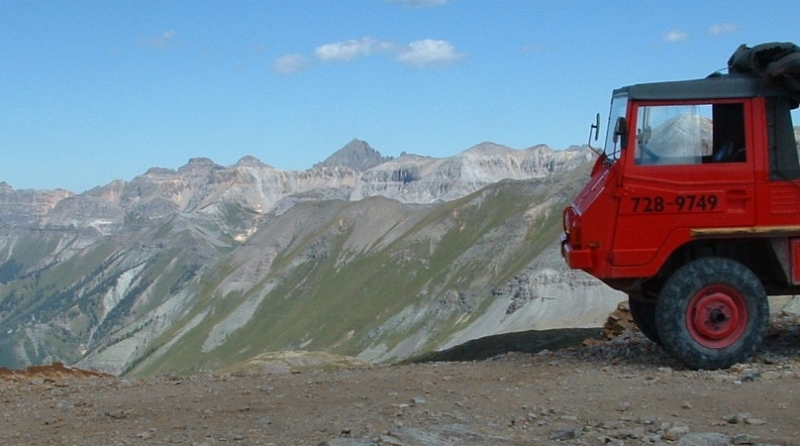 Mt Sneffels from the Summit of Black Bear Pass!