I had written this many years ago for a 4×4 mag!

I had almost forgotten I had written this when I stumbled upon it, search for some thing else, so I thought I had better copy and paste it on to my site to save for prosperity you could say 😉

Hi my name is Clay, I started off last Summer season just busting buttons, after close to twenty years of giving 4X4 tours in the San Juan Mountains of Colorado, I was finally getting a chance to drive a vehicle that was truly different. Over the years I have driven quite a variety of American made vehicles in these mountains, Jeep CJ 7s & 8s, J20 PUs and Cherokees, but the old war wagon that I have drived over black bear pass hundreds of times was the 80s era 3/4 ton leaf spring suspension, 350 V8, 4 speed tranny, open differential, you know old school all the way GMC/Chevy Suburban. But Dave of Dave’s Mountain Tours of Telluride Colorado ( telluridetours.com ) had something new in store for me.

Pinzgauers are the Swiss Army’s version of a Jeep or now days a Hummer and had a lot of features I was looking forward to experiencing. Since the San Juans are often referred to as the Switzerland of America we figured the Pinzy would be perfect for giving tours in them. Pinzys have Independent Suspension all the way around and Gear Reduction at the wheels which gives you gobs of clearance. They give you plenty of levers to play with, the Gear shift has a long linkage to the 5 speed Tranny and shifts much like a V.W, a mechanical lever that engages the low range and then across the dash are 3 hydraulic levers that with a quick flip will engage the 4X4 transfer case, lock the rear differential and lock the front differential. The drivers seat is located in front of the front tires which gives you an unobstructed view of the road as opposed to the Burb that has a huge hood out front, you learn to drive by braille. The air cooled, 96 H.P ( at sea level ) 4 cylinder, in line motor sits next to you under the dog house and they are built like a tractor with no frame, the drive train acting as the support structure. So you can see why I was so excited after logging so many miles in the big pig Burbs.

So early in June I get my first opportunity to try out what I figured was going to be the ultimate 4X4, but my infatuation soon began to diminish. On my way to Ophir pass ( we jokingly call it Oh-fear because it is so tame) I find 2 drawbacks, for one they have no power steering, a luxury I have grown to appreciate and typical of an air cooled engine, no heat to speak of, but these I could tolerate as long as they proved off road worthy. I soon realize the 96 H.P 4 banger lacks a little in the get up and go department so I shift it down into low range, and I go ahead and lock the transfer into 4X4, but I don’t figure I will need to lock the differentials, it was never even an option in the old Burbs, but 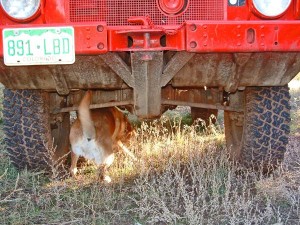 This shows you how much clearance a Pinzgauer has, because of it Portal Axles my Golden Lab can practically walk under the axles!

as the trail gets a little rough I find that the Pinzy breaking traction to beat all. Locking the rear differential cures the problem, but why is there a problem? I theorize that it must have to do with the Independent suspension, with the old school solid axle the leaf springs try to leverage the tires to the ground, the indy suspencion allows the tires to pretty much float around wherever, some times totally off the ground. I am starting to loose enthusiasm till I find a large snow drift across the road, I lock both diffs and let it churn its way through, now that’s better, but without power steering it is a real work out so I disengage the front diff a.s.a.p.

The next test, Imogene Pass, was soon open. Over all the Pinzy performed fairly well, all locked down it churned its way up the steep dump pile at the Smuggler Union mine, Burbs without lockers relied on momentum and brute H.P which they had. On the pull from the Tomboy mine at 11300 ft to the top of the pass at 13114 ft in less than a mile ( I call this vapor lock hill ) the pinzy broke no speed records, but pulled to the top without a hitch, but with like a sigh of relief, when I turn it off, it would wind down a bit then blow a big embarrassing back fire out the tail pipe.

Black Bear pass, the grand daddy of them all, I have been over this hundreds of times, mostly in the big pig Burbs, so I was looking forward to trying the Pinzy and comparing its performance. As always my anxiety grew as I neared the stairsteps but after my traditional prayer I started down. The most positive thing was that it was sure nice not having to worry about popping the diffs on rocks, because I had plenty of other things to worry about. I found dropping off the steep steps a bit un easing, not only did sitting in front of the front wheels make you feel like you where nosing straight into the ground, but the rear tires where literally coming off the ground, some of the off chamber spots I felt like it was going to fall over, but it didn’t thank God. A fellow guide told me that he witnessed a Pinzy perched on its nose with the 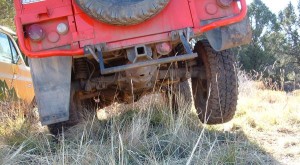 This shows how easily the Tires come off the ground on a Pinzgauer- the limiter straps will only let the suspension drop so far then the Tire just comes off the ground as such!

rear wheels off the ground, now I believe him. With the Steps behind me it was time for the worlds tightest Switchback, and a Pinzy can turn tight so I was sure it would excel in the corner. There is no vehicle that can just turn this corner, you have to work your self around, in a Burb you would pull down into the elbow, crank the wheels and back up into the inside wall of the corner till the trailer hitch runs into the wall ( we call that a rocky mountain curb feeler ), crank the wheels again ( I did mention that the Pinzy has no Power Steering ) pull forward to the edge as close as you dare, back and forward a few more times and you would be around. I was thinking one back in the Pinzy and it should be on around, but as I was backing it got cocked over by a little step and once again felt like it was going to fall over, so I had to stop way before I felt my curb feeler, it takes me 4, count them 1,2,3,4, backs to get around this stinking corner.

That was it, the infatuation was over, I felt betrayed, I felt guilty that I cheated on my old faithful Burb. But what is done is done, and next summer you will once again find me wheeling around in a Pinzgauer. Why you may ask? Because I am a professional driver and the Pinzgauer is what I am paid to drive. See you in the Hills.

My Final words on this subject of 4×4 vehicles!

I originally wrote this 7-8 years ago and have since logged a lot of hours behind the wheel of a Pinzgaure and have also had to send my old Suburban to the Merry 4×4 grounds.  There are still a few time when I feel a bit uneasy when a Pinzgauer is rocking back and forth with it strange suspension but I do feel like they are super reliable and have really grown to love driving them and after 8 years they have never (well almost) let me down and left me stranded in the high country.  So as I still say:

See Ya in the Hills! Lets meet on our Face Book Page!